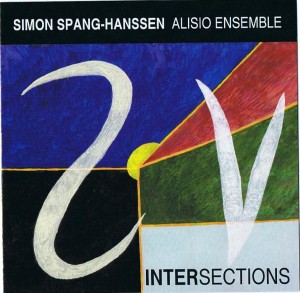 Kristian Jørgensen,        violin
Mariane Bitran,           flutes
Henrik Sveidahl ,       bass-clarinet, tenor-saxophone
Bent Clausen ,            vibraphone
Benita Haastrup,         percussion
Peter Danstrup,            bass
Mikkel Schnettler,            percussion
Simon Spang-Hanssen ,   soprano & alto-saxophones, flute,  compositions.
CD: “Intersections”  Alisio Music ALCD004
.
http://www.soundcloud.com/simonspanghanssen/sets/alisio-ensemble
” This is something as rare as a joyful record, and it is contagious, the listener actually
joins a happy mood while listening to it… and why all this weeping and mourning, when life- and music- can be easy, fun and playful ? “
Anders Kirkegaard    Jazz Special (DK) 2010
.
” His stay in France from 1985 until the end of the nineties has left an important stamp on his music. The French meltingpot, in which inspiration from Arabic and African musical cultures is very present, has also left it’s marks on the music of Simon Spang-Hanssen…. the music is carried by a sort of extroverted playful joy, in which the inquisitive and adventurous musicians catches us with positive energy.”
Niels Overgaard    Jazz Nyt (DK)  2010
.
on several occasions Alisio Ensemble has invited choreographer/dancer Barthelot Ekeme Samé (Cameroun) to perform on chosen pieces.

https://youtu.be/-brg6-44_Uk
Concerts in Denmark between 2006 and 2015
Winther Jazz-Festival , Lyngby Cultural Center
Paradise Jazz , Huset, Copenhagen
Huset i Hasseriisgade, Aalborg
Testrup Hoejskole
Ry Hoejskole
Giant Steps,Svendborg
Aarhus Jazzfestival, Atlas
Aarhus Jazzfestival, Klostertorv
Portalen, Greve, Denmark
Godset, Kolding
Kunstbygningen, Aarhus Jazzselskab
Plan B, Huset, Copenhagen Jazzfestival
Kongens Have (Royal Garden), Copenhagen Jazzfestival
Alisio Ensemble is the continuation of ”Maaneklar ” ,which first started out in 1996 in Paris as a quintet: flute, saxophones, bass and two percussionists. Some of the original members were Richard Bona, Francois Moutin and Xavier Desandre; upon the leaders return to Denmark in 1998 the line-up was more steady an included Mariane Bitran, Peter Danstrup, Jacob Andersen and tabla-player Ole Theill .
(CD: “Wondering” on  Dacapo 1999 )
This new octet-version is a development in which the general sound picture is enlarged while still keeping a special timbral universe, very focused on melody/rhythm/polyphonics  and containing references to all kinds of musical cultures: Brazil, Turkey, India, West-Africa…modern western music (Bartok, Ravel…), jazz (Shorter, Ellington, Gil Evans, George Russel…); the special instrumentation of the ensemble seems to allow all of these to flow together easily and creates some unusual color-combinations….
Quotes from articles about the original Simon Spang-Hanssen & Maaneklar:
“On “Wondering”, saxophonist Simon Spang-Hanssen with his group “Maaneklar” parralel Denmark’s beloved “New Jungle Orchestra” with the incorporation of  cross-cultural rhythmic elements along with, East meets West slants and motives.
Simon Spang-Hanssen is a very impressive technician whether performing on alto or soprano sax. Simply put, this guy can play! Hanssen has spent some time shedding with Vietnamese jazz guitarist Nguyên Lê, the celebrated drummer Billy Hart and ethnic-world music projects involving Turkish and Brazilian music. “
Glenn Astarita,  allaboutjazz.com
” Defining the music of Simon Spang-Hanssen (currently residing in Paris) as ”imaginary folklore” is quite precise. It avoids any phony exotics, yet the simple and repetitive patterns of Simon Spang-Hanssen’s themes has a touch of something ethnic…”
Boris Rabinowitsch     ,    Politiken
”One clearly senses the incessant presence and the inner glow whenever saxophonist Simon Spang-Hanssen is on stage..-there was certainly no idleness to be traced on this evening when he was leading his group ”Maaneklar”.The subject was a new and original perception of jazz, which, to a certain degree – and this very tastefully – had assimilated rhythms and melodies from all kinds of– and primarily eastern – folk-music.
Kjeld Frandsen    ,   Berlingske Tidende
“Superbly swinging fusionmusic .. Simon Spang-Hanssen and “Maaneklar” really gets out in the nooks and crannies, when they for a moment are inspired by both Indian and Arab folk-music, and then, in the next instant jumps into, what one might call, a rather untraditional blues. “
Troels Skærbæk  ,       Musikeren