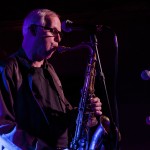 ” …is in an incredible shape, and in both ”Trinity Blues” and ”Flip Fool” his
playing almost makes you think of Sonny Rollins: energy and imagination
seems unlimited”

Joergen Siegumfeldt (Berlingske Tidende, DK )
” He makes you think of Johnny Griffin because of the velocity and the impatience, of Dexter Gordon because of a sort of feinted nonchalance, which is immediately counterbalanced by his George Adams-side ( a certain manner of transgressing the references by lyricism and excess ).”
Franck Bergerot    (Jazz Hot,    France )
“Finally, the freshness of the soprano-sound of Simon Spang-Hanssen, seems, to me, to be one of the most convincing today.”
Jean-Pierre Moussaron    ( Jazz Magazine, France )
«Simon Spang-Hanssen possesses the art of enthousiasming himself and his fellow musicians….»
Frank Buchmann-Moeller ( Fynsk Stiftstidende, DK )
” Spang-Hanssen is a very impressive technician whether performing on alto or soprano-sax. Simply put, this guy can play! “
Glenn Astarita   (allaboutjazz)
“An ardent European saxophonist, with a Texan sound, round, fleshy and with a passionate phrasing.”
Michel Contat    ( Telerama,   France )
“Spang-Hanssen places himself in a sort of post-bop tradition; and his playing, while staying highly personal, evokes that of grand masters like Coltrane, Rollins or Lacy.”
Sylvain Siclier   ( Jazz Man ,   France )
“The listener has a clear sense of continuous intensity and inner glow when the saxophone-player Simon Spang-Hanssen is on stage. “
Kjeld Frandsen     (Berlingske Tidende,   DK)
” The soprano finds its own sound, profound, sometimes enchanting, with the particular lyricism that is special for small-bodied instruments (and one notices a touching kinship with the harmonica of TootsThielemans in “Lady Love”). “
Yvan Amar   ( Jazzman,  France )
“His saxophone-playing is solid (yes, Long Tall Dexter has something to do with it), -long passionate lines, and this character of telling a story, which you do not find so often out there.”
Mario Benso   ( Jazz Special ,   DK )

“Saxophonist Simon Spang-Hanssen is a composer of remarkable originality.
Undoubtedly colored by his collaboration with a large spectrum of musicians during his long stay in Paris, the pieces had either African, Middle-Eastern or orthodox jazz-accents, without, at any point, giving the impression of being exercises in style. And- not least important- in a way so that appeared to have the melodic element as a determinating factor for the formal structure. At the same time the ethnic imprint was not so strong as to mask the basic jazz-roots of Spang-Hanssen: the final tune “Dexterism” was a vital, almost fiftyish classic blues and others were more or less modeled on the A-A-B-A form of American song-tradition.”
Thorbjoern Sjoegren ,   ( Politiken,   DK )
“ Very strong deal from saxophonist Simon Spang-Hanssen with his new ten-piece band and a gift-shop of energetic compositions, which, in a fertile way, blends jazz, soul, Latin and elements of world-music.
Christian Munch-Hansen  ( Information,  DK )
“In Denmark he has just completed a recording with a large group, in which he combines the essential elements that have always animated his music: Afro-Cuban rhythms and colors and aerien and uncluttered atmospheres. This record is a mix of fire and ice.”
Matthieu Jouan   ( Citizen Jazz ,   France )
ABOUT MAANEKLAR  Live and CD ( Wondering  DACAPO )
“Describing the music of Simon Spang-Hanssen as being an “imaginary folklore” is quite precise. It avoids any false exotics. At the same time, Spang-Hanssen’s simple and repetitive patterns brought a perfume of something ethnic. This was amplified by the ornamental character of his saxophone-playing and by a rhythmical support in which the normal drum set was replaced by hand-drums and other sonorities of a more ancestral kind.”
Boris Rabinowitch  ( Politiken, DK )
“Saxophonist Simon Spang-Hanssen with his group “Maaneklar” parallel Denmark’s beloved “New Jungle Orchestra” with the incorporation of cross-cultural rhythmic elements. The East meets West-blend is invigorating and refreshing.”Wondering”  is yet further evidence of an enormously talented conglomerate of Danish jazz musicians who are willing to take chances yet produce music that is surprisingly accessible.”
Glenn Astarita  ( allaboutjazz )
“This was original jazz, which, to some degree- and very tastefully- had appropriated rhythms and melodic colors from all kinds of- primarily oriental- folk music. But so-called world-music it was not. It was SimonSpang-Hanssen’s music, and as a composer, he played on his broad musical knowledge in the same manner that he- with authority and personality- played his soprano and tenor-saxophones.”
Kjeld Frandsen ( Berlingske Tidende DK )
ABOUT  S.S.H. Quartet w. Franck Tortiller, Francois Laizeau and Yves Torchinsky
( “Noctiflore“ Altrisuoni)
“” The effect of my Noctiflore ear bath was astonishing: the CD grew so much stronger, with Simon Spang-Hanssen’s powerful tenor in front of a quartet playing mainly his own compositions (except one song by Georges Brassens ). This powerful brew combines some elements that are not easily defined –because this is not your ordinary post bop, hard bop, neo-bop, fusion or whatever else we can hear in the jazz circuit today.
This recording may be classified as mainstream, but that’s only because none of the other categoriesseem to fit. But Noctiflore is distinct and melodic jazz with its very own character. “
Annika Westmann    ( allaboutjazz )
“A common element in all of these songs is the latent feeling of the blues and of grooves influenced by rock, reminiscent of the great time of progressive rock, but never leaving the jazz. None of the musicians get lost in a marathon of scales, in spite of (or maybe just because of that ) the high quality of the musicians, who tend to be guided by traditional values, which is always present. There are few musicians nowadays who can demonstrate that just four or five notes suffice to express brilliant ideas. It feels good to listen again to modern jazz that manages to surprise with consonance.”
Jannek Roland Meyer   ( Jazz Podium )